May 2 is Harry Potter Day, a celebration of the the Battle Of Hogwarts and the Lord Voldemort’s downfall.  If you are a fan of Harry Potter then you may want to try a few of these ideas to celebrate, making it fun for the whole family.  This year it falls on a Monday so you could even do some of it for Family Home Evening and talk about one of the movies and apply it to a gospel principle.  For example, how Satan seeks to destroy us and how we can fight back by doing things to stay strong like reading scriptures, going to church, praying etc. and compare it to how Lord Voldemort wanted to destroy Harry and how Harry had to study and work hard at school to learn how to fight back…Just an idea:)

I was a proud mama the other day when my kids actually got their creative juices flowing (something that doesn’t seem to happen very often as their attention goes directly to an electronic device the minute they wake up). My 13 year old daughter has been obsessed with Harry Potter since just before spring break when her piano teacher gave her a song to learn for her next recital. The song is called “Hedwigs Theme” from Harry Potter and the Sorcerer’s Stone.  To pump herself up to play this song she decided over spring break she was going to watch the whole Harry Potter series which got the rest of my kids excited for it.  They tried to watch them all but after number 6, “Harry Potter and the Half Blood Prince”, when Dumbledore died they couldn’t take it any more. My 13 yr old didn’t want to finish the last two because she didn’t want to watch anyone else die, she is very sensitive to those kinds of things

Conference weekend we always do a girls night together while the guys go to the men’s session and we like to craft.  My daughter told me she wanted to make Harry Potter wands.  I picked up some cheap chop sticks at Walmart ($1.07) and she gathered some beads and other things from around the house.  They used my glue gun to add the beads and to create the other texture on the chop sticks.  Then they painted them with my acrylic paint or spray paint, depending on the color they wanted.

My daughter even went as far as looking up the pictures of the wands from the movie, like this, and tried to make some of the different character’s wands.

After they made their wands they found a list of spells online and printed off this small portion and ran around the house saying spells while waving their wands around.  I would hear them saying the spell and then telling the person they were pointing to things like, “Tucker, you lost a limb.”  Then Tucker would start playing with one arm.  This just made me so happy.  Why can’t they do stuff like this all the time? Here is a great website with a full list of spells, I didn’t realize there were so many.

A fun thing to add to your Harry Potter celebration is Butter Beer below is a recipe that I tried years ago and loved. 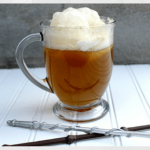